Current Position: US Representative for MD District 7 since 2021
Affiliation: Democrat

Featured Quote:
Spread the word- we passed a new child tax credit and you may be eligible for cash payments beginning July 15, 2021. Visit http://childtaxcredit.gov for details. #ChildTaxCredit

i
News from Congressman Kweisi Mfume

Today, our nation took a big step towards equality with the United States House of Representatives passing H.R. 4 – The John R. Lewis Voting Rights Advancement Act of 2021. This bill, among other things, will:

In the tradition of the great civil rights icon, the late United States Representative John R. Lewis, this bill combats the racially targeted voter laws that threaten our democratic system. An assault on our democracy is evident when state legislatures from Georgia to Texas and across our beloved land enact voter suppression laws that disenfranchise disadvantaged populations. I voted in favor of H.R. 4 because it ensures that all eligible voters across America can cast their vote in a free and fair election regardless of their race, social or economic status.

Our electoral journey is far from over, and though we may have come a long way with the help of folks like my friend John Lewis, we still have a long way to go.  Let us be as steadfast as those marchers across the Edmund Pettus bridge in our vigilance for voting rights.  We must urge the Senate to pass what the House has already marched through this Congress – the John R. Lewis Voting Rights Advancement Act of 2021. American democracy demands that we do this.

By the age of thirty-one he won his first election to the Baltimore City Council. During his seven years of service in local government, he chaired the City Council’s Committee on Health Policy and led the efforts to diversify city government, improve community safety, enhance business development and divest city funds from the then apartheid government of South Africa. He enrolled in and graduated from the Johns Hopkins University in 1984, earning a Master’s degree in Liberal Arts with a concentration in International Studies.

At the age of thirty-eight, he was decisively elected to the United States Congress to represent Maryland’s 7th District, a seat that he would hold for the next decade during the terms of Presidents Reagan, Bush Sr. and Clinton. As a member of the House of Representatives, Congressman Mfume was served on several committees. He served on the Banking and Financial Services Committee and held the ranking seat on the General Oversight and Investigations Subcommittee. He also served as a member of the Committee on Education and helped to impact commerce and industry matters as a senior member of the Small Business Committee. While in his third term, he was chosen by the Speaker of the House to serve on the Ethics Committee and the Joint Economic Committee of the House and Senate where he was later elected Chairman.

Congressman Mfume served as both Vice-Chair and later Chairman of the Congressional Black Caucus. He was regularly designated to preside as Speaker Pro Tempore of the House of Representatives. During his fifth term in office, he was appointed by his Caucus as Vice-Chairman for Communications.

Kweisi Mfume left his Congressional seat in 1996 to become President and Chief Executive Officer of the NAACP. During his nine years with the organization, he significantly raised the national profile of the NAACP while helping to restore its prominence among the nation’s civil rights organizations. Throughout his tenure he helped establish 75 new college-based NAACP chapters across the nation. In 2000, Mfume worked to negotiate, develop and author the first ever signed Network Television Diversity Agreements with NBC, ABC, CBS and Fox. In 2003, he helped negotiate for and successfully secured the NAACP’s official United Nations’ Status as a Non-Governmental Organization (NGO).

Mfume was sworn-in into the 116th U.S. Congress on May 5, 2020, after winning a special election to fill the remainder of the term after Congressman Elijah Cummings, the incumbent representative (and his friend of 42 years), died in office in October 2019. Mfume currently serves on the House Oversight Committee and the Small Business Committee.

Previously named “Marylander of the Year” by both the Baltimore Sun newspaper and Maryland Magazine
Recipient of the NAACP Image Award for national leadership
Received a Telly Award for the Television documentary “Ticket to Freedom.”
Performed in concert with opera soprano Kathleen Battle, and with the Baltimore Symphony Orchestra.

Congressman Mfume is also a member of the Congressional Black Caucus.

Kweisi Mfume (/kwaɪˈiːsi ʊmˈfuːmeɪ/ kwy-EE-see uum-FOO-may; born Frizzell Gerald Gray; October 24, 1948) is an American politician who is the U.S. representative for Maryland’s 7th congressional district, first serving from 1987 to 1996 and again since 2020. A member of the Democratic Party, Mfume first left his seat to become the president and CEO of the National Association for the Advancement of Colored People (NAACP), a position he held from 1996 to 2004. In 2006, he ran for the U.S. Senate seat that was being vacated by Paul Sarbanes, narrowly losing the Democratic primary to the eventual winner, Ben Cardin. Mfume returned to his former House seat in 2020 after it was left vacant by the death of Elijah Cummings.[1]

Mfume was born as Frizzell Gerald Gray in Baltimore, Maryland, on October 24, 1948, the eldest of four. His father, a truck driver, abandoned his family in Gray’s youth. Upon the death of his mother, Mfume dropped out of high school at sixteen to begin working as many as three jobs at a time to support his three sisters. He also began hanging around on street corners, which included being in the company of gang members.

In his 1996 autobiography, No Free Ride, Mfume said that he “was locked up a couple of times on suspicion of theft because [he] happened to be black and happened to be young.” Speculation as to the degree of his entanglement with the law has varied, especially as he later came into prominence. He fathered five children with several different women during his difficult teenage years. He has since adopted one child as well.[2][3]

Mfume with President Ronald Reagan in 1987 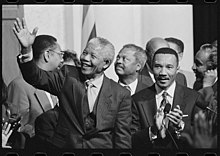 Mfume with Nelson Mandela in 1994

Mfume made himself known as a Democrat with an apparent balance between strong progressive ideologies and a capacity for practical compromise, representing a district that included both West Baltimore and suburban and rural communities, though his primary goal was an increase in federal aid to American inner cities. In his fourth term he was made chairman of the Congressional Black Caucus.[citation needed] 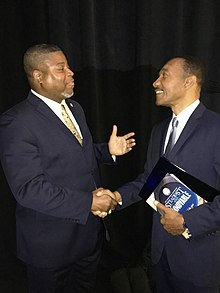 In February 1996, Mfume left the House to accept the presidency of the National Association for the Advancement of Colored People (NAACP), stating that he could do more to improve American civil rights there than in the Congress.[5] He reformed the association’s finances to pay off its considerable debt while pursuing the cause of civil rights advancement for African Americans. Though many in Baltimore wanted Mfume to run for mayor in the 1999 election, he stayed with the NAACP.[6]

Mfume stepped down from his position at the NAACP in 2004 after an internal investigation of allegations that he had sexually harassed female subordinates.[7] Mfume acknowledged dating an NAACP employee,[8] and in May 2005, he apologized for having had the affair while leading the organization.[9]

The NAACP reportedly paid out $100,000 to settle Mfume’s alleged improprieties.[10]

On March 14, 2005, Mfume announced that he would seek the U.S. Senate seat of incumbent Paul Sarbanes, following the announcement by Sarbanes that he would not run for re-election in 2006.[11] The Democratic primary for this seat was held on September 12, 2006, and Mfume lost the race to U.S. Representative Ben Cardin.[12]

In the wake of his primary defeat, Mfume was believed to be considering running for mayor of Baltimore in 2007, though he had not publicly expressed interest in such a run.[13][14] On November 13, 2006, Mfume told a Baltimore-area radio station that “I don’t have any plans to run for mayor. She [incoming mayor Sheila Dixon]’s worked for and deserves an opportunity to lead. … I want her to succeed. I want the city to be united. I think at this point we owe her at least the opportunity to try to lead it.”

Mfume with wife Tiffany McMillan at the 2016 Democratic National Convention

In May 2013, Mfume was named chair of the board of regents of his alma mater, Morgan State University. He assumed the position on July 1, 2013, succeeding the interim chair Martin Resnick.[18]

From mid-2013 to mid-2018, Mfume was the principal investigator for the Health Policy Research Consortium.[19] 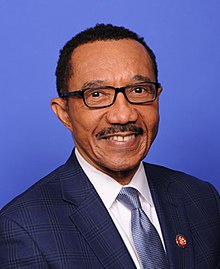 Mfume during the 116th Congress

On November 4, 2019, Mfume announced his candidacy for the special election for his old congressional seat to fill the vacancy created by the death of his successor, Elijah Cummings, in October.[20] On February 4, 2020, Mfume won the Democratic nomination for his former seat, defeating Maya Rockeymoore Cummings, the widow of Elijah Cummings. As the 7th is a heavily Democratic, black-majority district, this all but assured Mfume’s return to Congress after a 24-year absence. He defeated Republican candidate Kimberly Klacik in the general election on April 28, 2020[21][1] and was sworn in on May 5, 2020.[22]

Mfume ran for a full term in the November 2020 race and won, again defeating Klacik.[20]

In the 117th Congress Mfume serves on the following committees:[23]

Mfume is a member of the Prince Hall Freemasons[25] and Omega Psi Phi fraternity.

Learn more about legislation sponsored and co-sponsored by Representative Mfume.

OnAir membership is required. The lead Moderator for the discussions is CJ Nicholson. We encourage civil, honest, and safe discourse. See Terms of Service for curation guidelines.

This is an open discussion on the contents of this post.